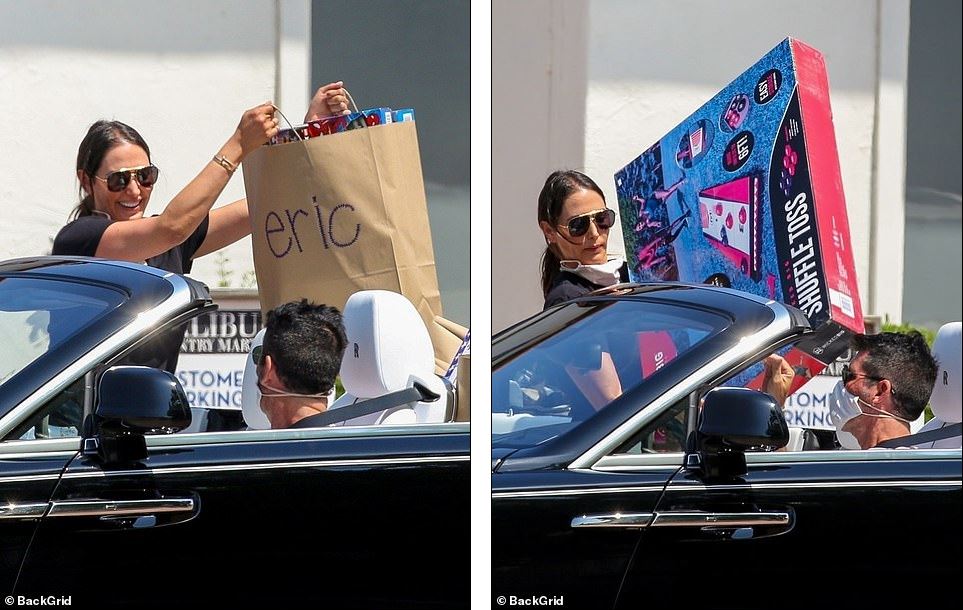 Simon Cowell and his partner Lauren Silverman filled their $450,000 Rolls Royce Phantom with a bunch of toys for their sons as they stepped out in Malibu, California on Saturday. The music mogul and TV-star, 60, appeared in great spirits as he and his girlfriend, 42, headed home in the flashy car after a generous trip to Toy Crazy in a bid to bring some light relief to their children Eric, six, and 14-year-old Adam Silverman – who Lauren shares with ex-husband Andrew – amid California’s COVID-19 lockdown. The couple appeared to put on a united front after Amanda Holden’s daughter Hollie, eight, sparked confusion by questioning whether they had split during a bizarre Instagram Live, before the pair were forced to deny rumours which claimed Simon had an affair with Mel B. The pair ensured they stayed protected while entering the children’s store as they sported face masks, and later removed the accessory when they hopped back into their automobile. A delighted Lauren was pictured holding onto a bag of goodies with their six-year-old son’s name emblazoned across it, before the socialite’s hands were full with a box of Shuffle Toss.

1. Expected 4 iPhone sizes in three display sizes which could be 5.4, 6.1 and 6.7 inches Every summer, rumours … END_OF_DOCUMENT_TOKEN_TO_BE_REPLACED

1. The all new 2020 Mercedes GLA This is the all-new Mercedes GLA – the latest version of Mercedes’ entry-level … END_OF_DOCUMENT_TOKEN_TO_BE_REPLACED

1. Jokers or funny people trying to share misinformation on social media Many governments have tried their absolute best to … END_OF_DOCUMENT_TOKEN_TO_BE_REPLACED