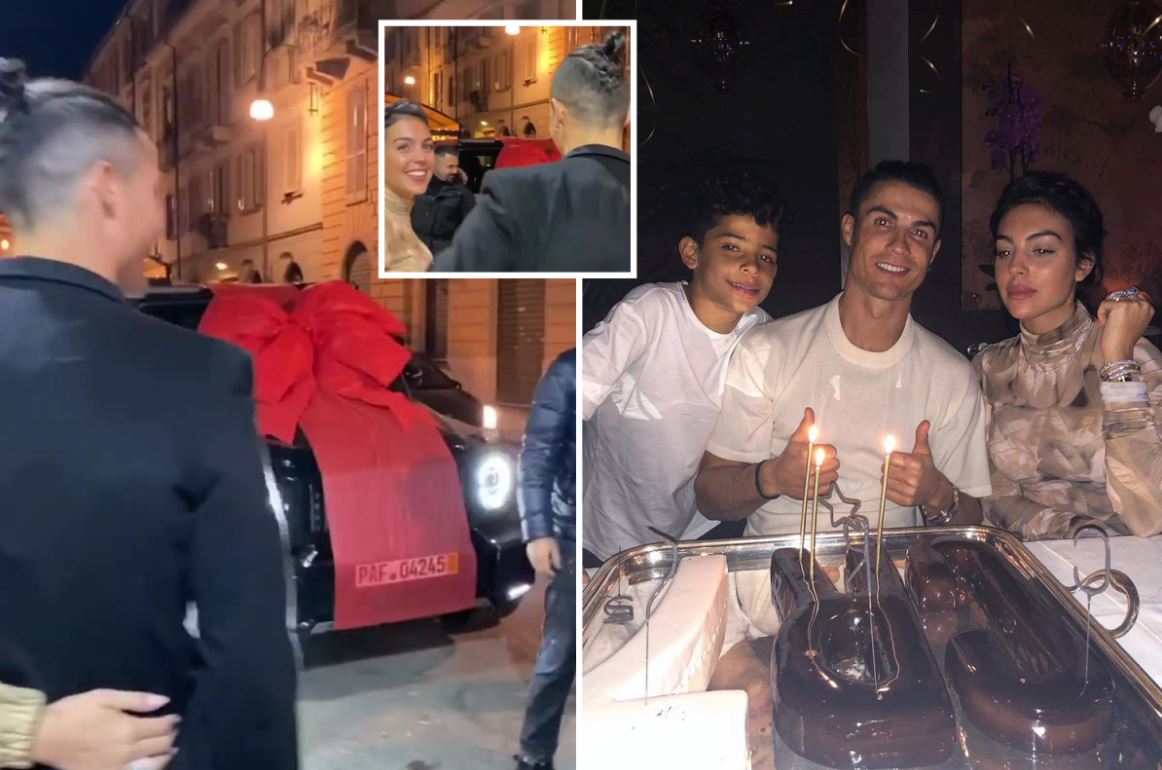 Juventus and Portugal football star Cristiano Ronaldo was surprised and presented with a brand new car and huge cake bearing ‘CR7’ to celebrate his 35th birthday, in Italy last night. The star, who was joined by girlfriend Georgina Rodriguez and son Cristiano Jr, uploaded a picture on his Instagram showing off his new treats. While sporting a great big smile and holding two thumbs up, Cristiano Ronaldo said: “It’s time to celebrate my birthday. Thanks my love for this amazing surprise.” The cake was complete with ‘CR7’ sparklers, as well as a star, and three candles. The number 7 of course resembling his famous shirt number that he’s worn across his career from Manchester United, to Real Madrid and now to Juventus. However, the brand new car was the masterpiece of the show. Ronaldo was greeted by his brand new £600,000 Mercedes Benz G800 Brabus. The limited edition wagon comes exclusively from German specialist after-market manufacturer Brabus, who deal with high-profile, luxury cars. Ronaldo’s 28-year old girlfriend of many years now went on to comment ‘Congratulations to the man of my life! What a desire to transport our love in your gift.’. The unveiling was in front of a bunch of his friends, and they went on to have a dinner date at Turin’s Ristorante Casa Fiore. Here are some of the best shots of Ronaldo’s 35th birthday along with the presents.

Simon Cowell and his partner Lauren Silverman filled their $450,000 Rolls Royce Phantom with a bunch of toys for their … END_OF_DOCUMENT_TOKEN_TO_BE_REPLACED

1 of 9 It’s often said that everyone out there has an identical somewhere in the world. Whether you run … END_OF_DOCUMENT_TOKEN_TO_BE_REPLACED

1. Mercedes V-Class You may have noticed when watching a movie or video from another continent, when you see a … END_OF_DOCUMENT_TOKEN_TO_BE_REPLACED