Revolution of the famous Mercedes G-Class 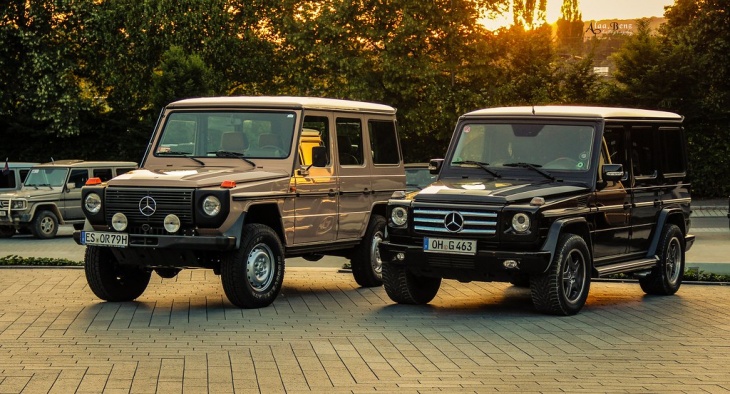 3. Old G-Class alongside a modern one, shows similar shape

The Mercedes G-Class, or G-Wagon, first came onto the scene in 1979. 40 years later, the infamous box-styled 4×4 is still in production and one of Mercedes’ longest serving produced vehicles ever. What makes the G-Class’s story so interesting is that over the past 40 years, the iconic shape, structure and presence has remained absolutely the same. While the car has excelled through generations by claiming newer technology and car industry trends, the shape and appearance almost looks identical to the very same car as it was first released in the 70s. The Mercedes G-Class is quite a pricey vehicle, with baseline models starting at around $130,000 and going up to $200,000 depending on the model line. It’s extremely popular with celebrities, simply due to it’s exclusive appearance, road presence, combination of luxury and sport, as well as it’s ability to keep it’s occupants safe. The newer G-Class, that was officially released in 2019 has an all-new interior design, with a completely renovated dashboard and exterior features that were nowhere to be seen on previous models. It is currently one of the most in-demand cars on the market with waiting lists of up to half a year in certain regions. We take a look at not only the latest model, but the revolution of the G-Class itself over the past 40 years.

Simon Cowell and his partner Lauren Silverman filled their $450,000 Rolls Royce Phantom with a bunch of toys for their … END_OF_DOCUMENT_TOKEN_TO_BE_REPLACED

1 of 9 It’s often said that everyone out there has an identical somewhere in the world. Whether you run … END_OF_DOCUMENT_TOKEN_TO_BE_REPLACED

1. Mercedes V-Class You may have noticed when watching a movie or video from another continent, when you see a … END_OF_DOCUMENT_TOKEN_TO_BE_REPLACED