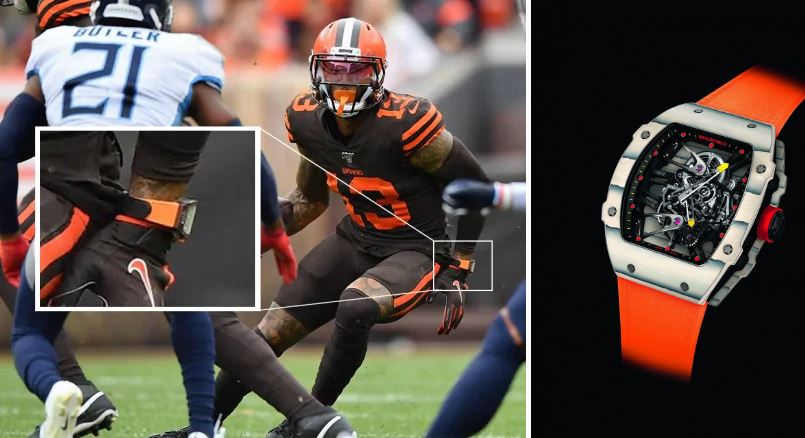 The stars of the NFL are paid tens of millions of dollars per year to play the sport they’ve been playing since they were young. The case for Cleveland Brown star Odell Beckham Jr is no different. Only last year, Beckham became the first wide receiver to sign a 5-year $100 million contract at New York. He was subsequently traded to the Cleveland Browns after the New York team had concerns about his character. Odell Beckham Jr is a high-profile sports celebrity and with his famous blonde hair is known globally. He’s known for a number of things, number one is his outstanding ability at playing football, but second to that is his glamorous lifestyle, expensive taste and Hollywood status. Even so, his latest stunt was by far the most extreme we’ve seen. In last Sunday’s NFL opener at home to the Tennessee Titans, Odell Beckham Jr wore his $300k Richard Mille watch throughout the whole game. Despite wearing the watch, Odell still performed to a high level, but his team lost the game quite badly. Many are now questioning his commitment and whether he did the right thing by wearing a $300k watch to such an event. Other celebs that own a Richard Mille include Rafael Nadal, Kevin Hart, Chris Brown and many more.

1. Expected 4 iPhone sizes in three display sizes which could be 5.4, 6.1 and 6.7 inches Every summer, rumours … END_OF_DOCUMENT_TOKEN_TO_BE_REPLACED

1. The all new 2020 Mercedes GLA This is the all-new Mercedes GLA – the latest version of Mercedes’ entry-level … END_OF_DOCUMENT_TOKEN_TO_BE_REPLACED

1. Jokers or funny people trying to share misinformation on social media Many governments have tried their absolute best to … END_OF_DOCUMENT_TOKEN_TO_BE_REPLACED