The darkest car in the world is a BMW 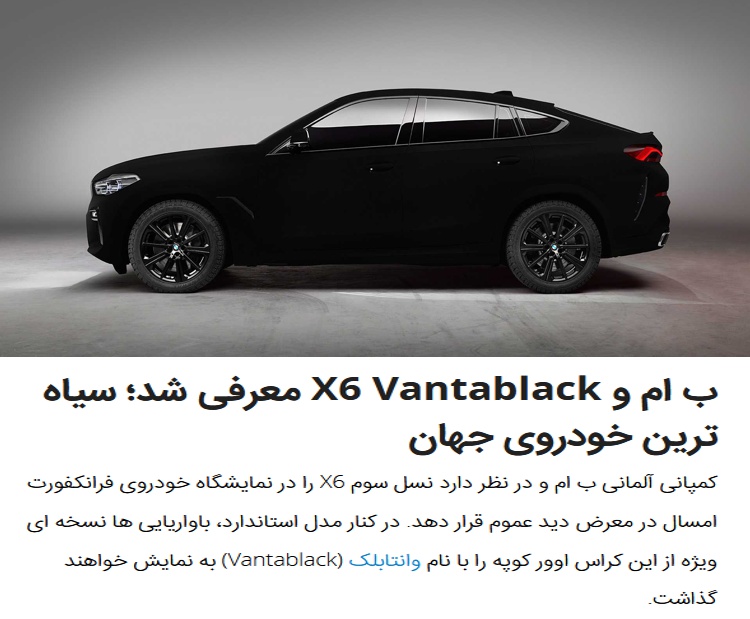 Vantablack is said to be the world’s “blackest black” shade there is. It’s for that reason that BMW have controversially introduced their new BMW X6 Vantablack model. The one-off BMW X6, which has been sprayed with a Vantablack VBx2 finish is set to be unveiled at the Frankfurt Motor Show, where BMW will premiere the third-generation of the X6 models. The science behind it is quite simple. Vantablack absorbs up to 99% of the light, which makes it officially the darkest pigment on Earth. The exact reasoning behind the move by BMW isn’t clear, but a best guess would suggest it’s a marketing strategy to generate some hype around the yet to be launched new X6. Hussein al-Attar, who designed the new BMW X6, says Vantablack VBx2 opens new possibilities for designers. He went onto say “We often prefer to talk about silhouettes and proportions rather than surfaces and lines,”. The BMW Vantablack X6 will be on show at the Frankfurt Motor Show on September the 12th, through to the 22nd. The new BMW X6 will be in showrooms around November time. Here are some of the best promotional pictures of the BMW Vantablack X6.

Brabus Automotive are known for one thing only – making already high performing cars, even better. Their project with the … END_OF_DOCUMENT_TOKEN_TO_BE_REPLACED

10. Mercedes EQC Battery range up to 260 miles Price from £67,950 The electric car market is well and truly … END_OF_DOCUMENT_TOKEN_TO_BE_REPLACED

1. Different shape on the cockpit windows Airbus and Boeing are two of the world’s longest serving, and most popular … END_OF_DOCUMENT_TOKEN_TO_BE_REPLACED

1. All new Silverado EV Chevrolet has revealed an all-electric variant of its extremely popular Silverado pick-up truck ahead of … END_OF_DOCUMENT_TOKEN_TO_BE_REPLACED