Man living in a commercial airliner in the woods 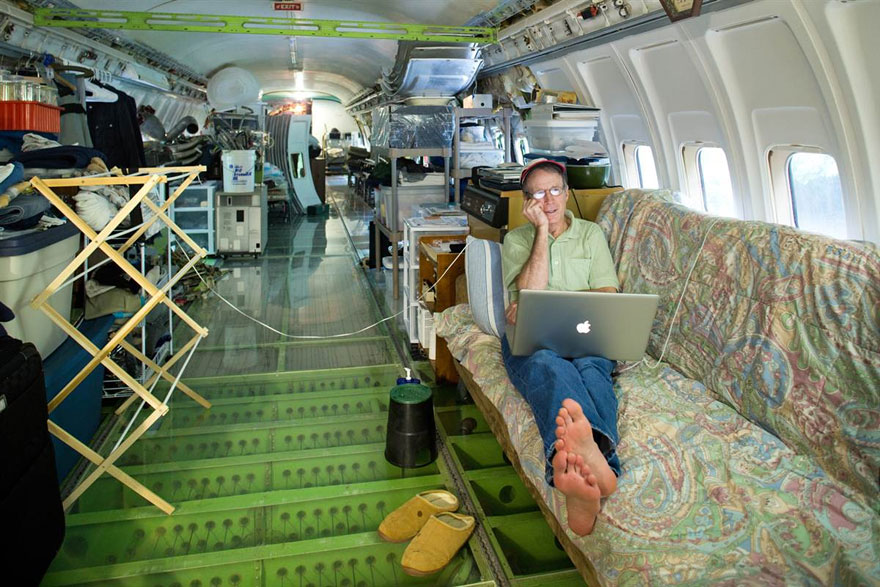 We’ve all heard of people finding inventive ways of figuring out where to live and have shelter, but this particular individual has gone to extremes in order to find a home. Bruce Campbell, who is an inventive engineer actually bought a retired Boeing 727 aircraft and transformed it into a home for himself. What used to be a large commercial airliner travelling at over 600 mph in altitudes of over 36,000 feet is now a grounded aircraft fuselage propped upon concrete pillars in the woods. The location of Bruce’s aircraft home is in Portland, Oregon. He has his own driveway, living area, kitchen, toilet and more. The actual fuselage of a Boeing 727 is quite substantial, so Bruce has been able to really make it feel like home. The land within the wooded area cost him $23,000 and the actual airline itself set him back $220,000. Campbell lives in the jet for only 6 months per year. He spends the rest of him time in Japan where he is looking to buy a similarly retired aircraft to achieve the same thing. Here are some of the best shots of Bruce Campbell and his home Boeing 727.

Brabus Automotive are known for one thing only – making already high performing cars, even better. Their project with the … END_OF_DOCUMENT_TOKEN_TO_BE_REPLACED

10. Mercedes EQC Battery range up to 260 miles Price from £67,950 The electric car market is well and truly … END_OF_DOCUMENT_TOKEN_TO_BE_REPLACED

1. Different shape on the cockpit windows Airbus and Boeing are two of the world’s longest serving, and most popular … END_OF_DOCUMENT_TOKEN_TO_BE_REPLACED

1. All new Silverado EV Chevrolet has revealed an all-electric variant of its extremely popular Silverado pick-up truck ahead of … END_OF_DOCUMENT_TOKEN_TO_BE_REPLACED