Building an Airbus is no easy task 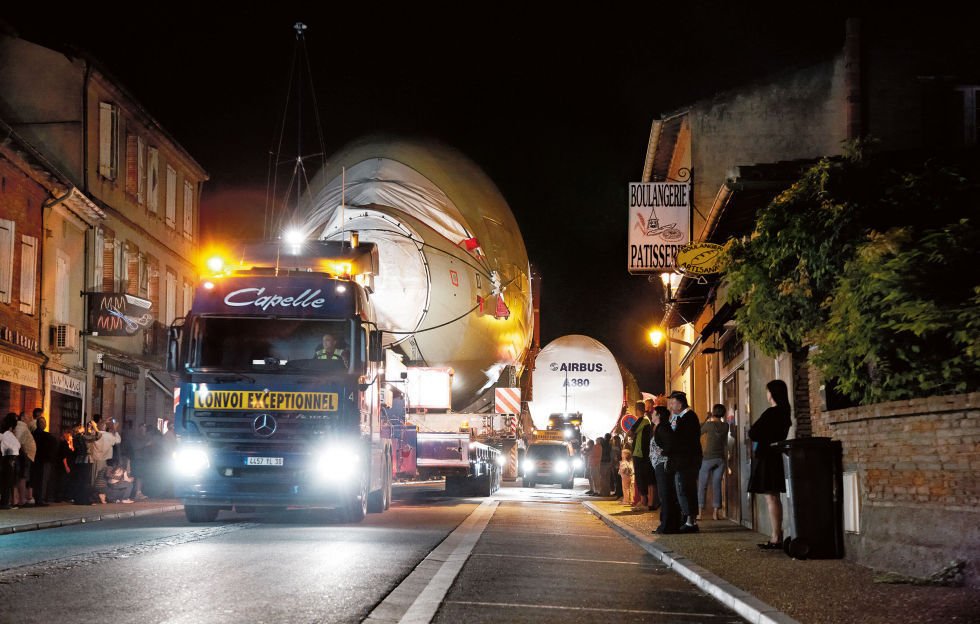 1. The Airbus A380 fuselage passes through European towns

You won’t be surprised to hear that building an Airbus A380, the world’s largest passenger jet is no easy task. You will however be surprised about the journey in which some of the four million parts involved take, in order to reach their destination. Getting all the parts required to build the $433 million plane is arguably harder than building the plane itself. The reason is simple. Parts arrive from all over Europe in a variety of ways. For example, the parts of the fuselage might be shipped across European canals before being loaded onto an awaiting truck. While other parts such as the wings might be convoyed through small European towns in the middle of the night, with a police escort of up to 30 units through all sorts of climates. In fact, in the French town of Toulouse, crowds in their hundreds gather every few weeks to celebrate the transportation of the Airbus A380’s future wings, fuselage sections and horizontal tailplane. The significance of this Toulouse destination is that within their major airport, Airbus have their building facilities, so the celebration is of the parts arriving to be put together. Some of the major parts destinations for the Airbus A380 come from Wales, Hamburg in Germany, Cadiz in Spain and Northern France. The images show the sheer magnitude of the difficultly with transporting the parts, in order to build an Airbus.

Brabus Automotive are known for one thing only – making already high performing cars, even better. Their project with the … END_OF_DOCUMENT_TOKEN_TO_BE_REPLACED

10. Mercedes EQC Battery range up to 260 miles Price from £67,950 The electric car market is well and truly … END_OF_DOCUMENT_TOKEN_TO_BE_REPLACED

1. Different shape on the cockpit windows Airbus and Boeing are two of the world’s longest serving, and most popular … END_OF_DOCUMENT_TOKEN_TO_BE_REPLACED

1. All new Silverado EV Chevrolet has revealed an all-electric variant of its extremely popular Silverado pick-up truck ahead of … END_OF_DOCUMENT_TOKEN_TO_BE_REPLACED