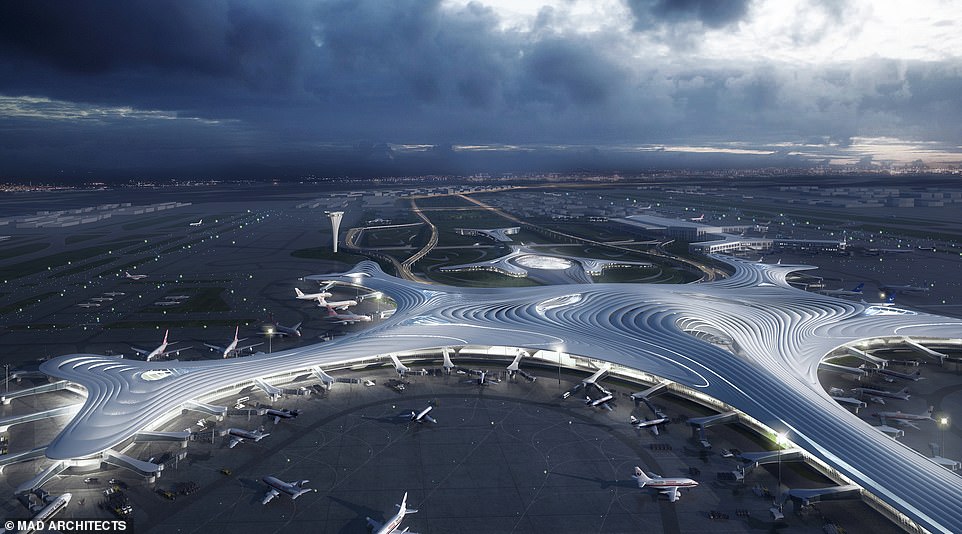 Architects have shown off brand new designs for the third terminal of Harbin Taiping International Airport. The snowflake inspired design for the terminal handles up to 43 million passengers per year and is due for completion in 2030. The Chinese city of Harbin itself is most notably famous for it’s festival of ice, and is often referred to as the ‘city of ice’. The newly designed 5-wing terminal will be a very fitting touch from Mad Architects, famous for their illustrious architecture designs. China are attempting to boost their aviation industry and as this terminal will handle 320,000 takeoffs and landings per year, it’ll certainly help the economy and travellers. Along with this, China’s capital city Beijing is also set to open a huge new airport in September, this year. Along with each of it’s 5 wings, Terminal 3 of Harbin Taiping International Airport will be able to fit 89 aircraft stands within it’s snowflake design. The airport recently opened Terminal 2 a few years ago following a couple of years of construction. With figures showing the airport can handle 80 million passengers by 2035 and over 100 million by 2050, it’s no surprise that this incredible design is eye-catching and practical at the same time. Here are some superb shots of Harbin Taiping International Airport’s all new snowflake designed third terminal.

Simon Cowell and his partner Lauren Silverman filled their $450,000 Rolls Royce Phantom with a bunch of toys for their … END_OF_DOCUMENT_TOKEN_TO_BE_REPLACED

1 of 9 It’s often said that everyone out there has an identical somewhere in the world. Whether you run … END_OF_DOCUMENT_TOKEN_TO_BE_REPLACED

1. Mercedes V-Class You may have noticed when watching a movie or video from another continent, when you see a … END_OF_DOCUMENT_TOKEN_TO_BE_REPLACED